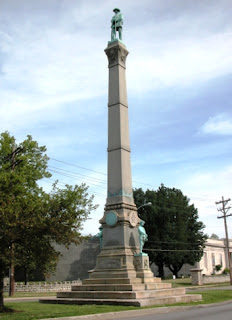 ﻿Located at the convergence of 2nd and 3rd Streets in Louisville, the largest of Kentucky's Civil War monuments was erected by the Kentucky Women's Confederate Monument Association in 1895. Led by Susan P. Hepburn of Louisville, the organization raised $12,000 to construct this 70-foot-tall monument. It is located on the northwest edge of the University of Louisville campus, near what later became the site of the J. B. Speed Art Museum.

Four tiered granite steps support the main pedestal, which is topped by a 95-inch-tall bronze figure of an infantryman holding a rifle down in front of him with both hands. Smaller pedestals on the east and west sides support life-sized bronze figures. The east figure is an artilleryman holding a ramrod; the west figure is a cavalryman drawing a sword. The figures were created by Ferdinand von Miller, an internationally-known German sculptor, and multiple casts were sold through monument companies (Raleigh, North Carolina has one), a typical practice. Additional decorative details include cannon balls in relief, crossed swords, and the seal of the Confederate States of America.

The monument nearly didn't survive to our time, and it is threatened even now. Public opposition prevented its removal as a traffic hazard in the 1920s and 1940s, though the original 48-foot diameter circle was reduced in size, and the lighting removed in the 1950s. More recently, many calls for its removal have come as the monument is "politically incorrect" for our times. Ornamental trees have been planted near the base of the monument to somewhat obscure its message.

Early in 1862, as Confederate soldiers in the Western Theatre began to be taken as prisoners during the War Between the States, the Federal authorities established a system of military prisons to handle these prisoners of war. Later, many of these prisons were expanded to hold civilian political prisoners and Federal soldiers who had been convicted by court martial.

A military prison was established in Louisville, primarily as a collection and distribution center for prisons further north. Until the Federal forces had moved deep into Tennessee in late 1863, the Louisville prison was considered too near the Confederate lines to serve as a permanent detention center, and it continued to serve only as a half-way point throughout the war. The only prisoners who stayed long in Louisville were those who were too badly wounded or too sick to send further North, along with various Southern civilian political prisoners (although some of these were also transferred).

The military prison was located on Broadway, between Tenth and Eleventh. A facility for female civilian prisoners was established at Broadway and Twelfth (some female prisoners were also kept at Barracks No. 2, a facility for paroled US soldiers on Main between Seventh and Eighth). The sick and wounded prisoners were treated at a prison hospital co-located with the prison buildings (Military Hospital No. 2), or at one of the branches of the Eruptive General Hospital (established to treat cases of contagious diseases).

The first Confederate prisoners seem to have arrived in Louisville shortly after the capture of Fort Donelson in February 1862, and hospital deaths started to mount with the influx of prisoners from the battle of Shiloh in April 1862. The local military authorities did not want the Confederates to be buried with the Federal dead in Cave Hill Cemetery, so Elijah Lyter Huffman and Samuel S. Hamilton, local Southern sympathizers, purchased several lots for the Confederate dead. These became Lots 246- 267 in Section "O." In the early 1890s, Lot 267½ and its adjacent Addition were set aside for burial of Confederate veterans (a few veterans had previously been buried in empty spaces among the wartime burials and at the ends of rows in Lots 246-267). 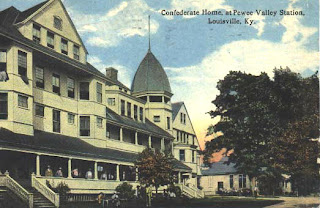 The Kentucky Confederate Home, which occupied a tract of land close to the cemetery off Hwy. 146, opened in 1902 as a state residence for indigent southern veterans of the Civil War. Although the home no longer exists, its historical significance is documented in records kept by the Kentucky Historical Society.

The idea for a Confederate Home was conceived by native Kentuckian, Bennett H. Young. A businessman and former Confederate officer, Young noticed the need for a shelter for aging Civil War veterans who often suffered from war-related illnesses and were unable to provide for themselves.

Rallying support for a confederate home, Young formed a group that began to raise funds for the purchase of property for the home. After securing more than $16,000, the group proposed a bill to the state legislature asking for support of the project. The bill passed unanimously in both houses and a board of trustees was appointed to oversee the project.

The 15-member board, headed by Young, purchased the Villa Ridge Inn of Pewee Valley. The inn, which originally opened as a luxury summer resort for Louisville businessmen and their families, was an impressive three-story structure that boasted the majestic architecture of the period. But despite the beauty of the inn and its grounds, it failed to be a major attraction and was closed after a couple of seasons.

After being sold and operated unsuccessfully for a short time as a private high school, the building once again became available. Because of the unsuccessful ventures of the previous occupants, the Confederate Home committee was able to purchase the building for a fraction of its original construction price of $90,000. The committee began accepting applications, and after a few minor repairs, the Confederate Home opened its doors to the first occupant in November 1902.

The requirements for occupancy of the home included that the applicant be an honorably discharged Confederate veteran, a resident of Kentucky for six months prior, of sound mind and free of addiction to alcohol. Applications came from across the state, and soon the home became a sanctuary for as many as 350 aging and disabled veterans at a time.

Because the home was state supported, additional funds were appropriated from time to time for improvements, including the addition of an infirmary that was built on the grounds close to the home. In addition to improvements made by the state, occasional grants by private individuals allowed for additions such as an entertainment hall and library.

As well as providing shelter, food and medical care, the home provided many activities for the inmates including religious services and entertainment. Most of the activities that occurred at the home and general information about its daily operation were documented in the Confederate Home Messenger, a monthly newsletter published by the home.

On March 25, 1920, a fire destroyed a large section of the home. Fortunately, no lives were lost due to the tragedy, but the main building, the laundry and one ward of the infirmary were ruined. What was left of the property was sufficient to house the remaining inmates, whose numbers had dwindled over the years. 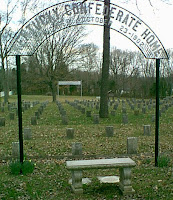 Although the home housed more than 700 veterans through the course of its operation, by the middle of 1934 only five inmates remained. After 32 years of operation, the decision was made by the state to close the home in July 1934. The five remaining inmates were transferred to the Pewee Valley Sanatorium and eventually what was left of the home was razed.

A remnant of the home, a gate bearing its name, can be seen at the Confederate Cemetery, which is listed on the National Register of Historic Places. Nearby stands a monument inscribed, “In Memory of Our Confederate Dead,” which was erected at the site in 1904 in honor of those laid to rest there. 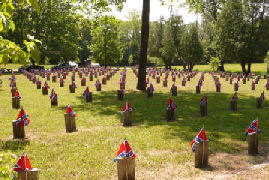 In the month of May 1871, Henry Smith, one of the oldest settlers of Pewee Valley (formerly known as Smith's Depot), enlisted the interests of a number of other prominent citizens in the laudable undertaking of establishing a public cemetery. Henry Smith was delegated to make a proper selection of a suitable plot of ground. A preliminary organization with T. H. Rhorer, Henry Smith, and S. Schuler as the executive committee was formed, and a plot was purchased in August of 1871. During the early Spring of 1872 the sections were shaped and partly graded, staked off into "lots" and planted with shade and ornamental trees, etc. During the Winter of 1872, Judge P. B. Muir formulated a charter and had it presented to the Legislature in Frankfort. On July 2, 1904, at a called meeting of Directors, it was resolved to approve the assignment of Section III (containing 11,275 square feet) to the State of Kentucky for the use of the Confederate Home.

Shortly thereafter a Confederate memorial was erected with the inscription, "In Memory of Our Confederate Dead." Of the more than two dozen Civil War obelisks erected in Kentucky, it is the only one cast from zinc. Most are carved of limestone or marble. The monument is also unusual for its architectural element separating the obelisk from the base. This section, which forms an arch on each face, resembles a Gothic altar and contains the inscription, plus depictions of Confederate flags on the three other sides.

LISTING OF SOLDIERS BURIED IN THE CEMETERY 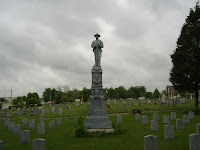 This fifteen-foot-tall monument in St. Joseph's Cemetery honors 67 Confederate soldiers buried around it. It was erected in 1903 by the J. Crepps Wickliffe Chapter of the United Daughters of the Confederacy, the state's most active monument-raising organization. The zinc figure of a Confederate soldier holding a rifle with both hands in front of him rests atop a multi-sectioned, ornamental pedestal with a limestone base. Directly beneath the figure is a relief portrait of Gen. Robert E. Lee.

Inscriptions: Lord God of hosts, Be with us yet; Lest we forget, Lest we forget. Marble tells not of their valor's worth, Nameless, they rest in quiet earth. We care not whence they came, Dear is their lifeless clay; Whether unknown, or known to fame, their cause and country still the same, they died and wore the gray.


LISTING OF SOLDIERS BURIED IN THE CEMETERY