John Hunt Morgan was born June 1, 1825 in Huntsville, Alabama, and moved to Lexington, Kentucky, as a young boy. He served in the Mexican War as a first lieutenant with the 1st Kentucky and saw action at Buena Vista. After the war, Morgan returned to Lexington, where he conducted a prosperous hemp manufacturing business. In 1857 he raised a local militia unit known as the Lexington Rifles. Morgan officially enlisted in the Confederate Army on October 27, 1861, and was quickly promoted to the rank of Colonel after leading the 2nd Kentucky Cavalry on a successful campaign behind enemy lines.

Morgan's bold tactics earned him the nickname "Thunderbolt of the Confederacy" and inspired the Confederacy's Partisan Ranger Act of April 21, 1862, which authorized President Davis to commission units of Partisan Rangers for detached guerrilla operations. Morgan was well-known for his raids from Tennessee into Kentucky by which he would not only disrupt enemy communications by tapping into Union telegraph lines, but also round up fresh troops and supplies for the Confederate Army. The raids of the romantic Morgan thrilled Southerners throughout the Confederacy and struck fear in the heart of many a Yankee.

Morgan went on to be promoted to Brigadier General and commander of the Department of Western Virginia and East Tennessee. On September 4, 1864, Gen. John Hunt Morgan was killed in Tennessee en route to attack federal forces at Knoxville, leaving behind his wife, Martha, pregnant with their daughter. He is buried in the city of Lexington where an equestrian statue, unveiled in 1911, exemplifies his appeal as a symbol of the Confederate cause.


For more information about John Hunt Morgan and the brave men who served with him, please visit our friends at the MORGAN'S MEN ASSOCIATION. 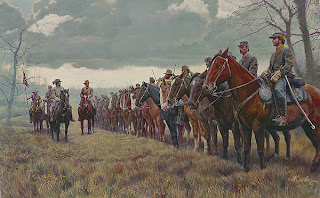 "But our victories have not been achieved without loss. We have to mourn some brave and dear comrades. Their names will remain in our breasts, their fame outlives them. They died in defence of a good cause. They died like gallant soldiers - with their front to the foe.

"Officers and men! Your conduct makes me proud to command you! Fight always as you fought yesterday, and you are invincible."